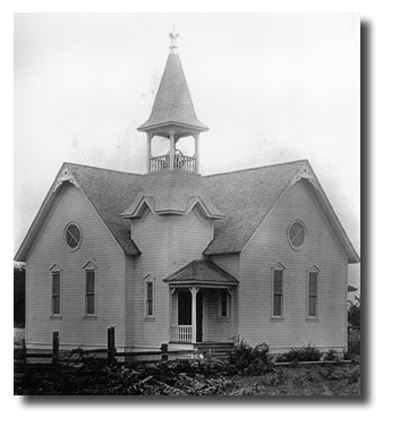 This Methodist Episcopal Church was built in 1908 near the intersection of 164th Avenue NE and Redmond Way. In 1926, the community moved the building by truck to its current location.

The Redmond Methodist Church was built in two phases. The first was in 1906 as a wood frame structure and the second in 1926-1927, when it was moved from its original site, extended with a masonry wing. It was originally located on what is now 164th Avenue NE near Bill Brown's Garage and remains the oldest surviving church in Redmond. Prior to access to a church, residents held services in their homes and occasionally supported a visiting pastor.

Once built, the church received visitors from the region, some traveling several miles for services or events. In 1926, the church was relocated to its current location at NE 80th Street on land donated by Marvin Perrigo. The present building was dedicated on March 2, 1928. Today, the original Redmond Methodist Church is used as a small chapel rather than as the main sanctuary.