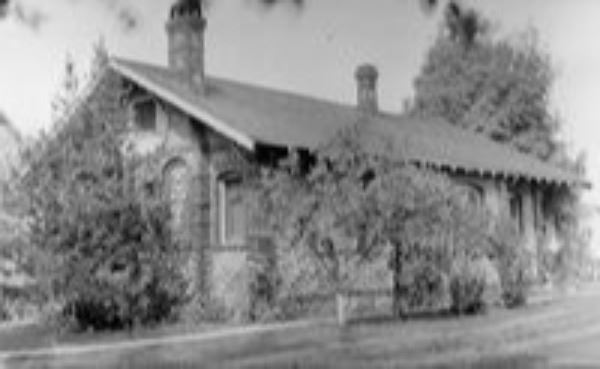 This building, located on Cleveland Street and adjacent to Downtown Park, is constructed of local stones, thus its name as the Stone House. It was built in 1916 by Orson A. Wiley and his wife, Emma Holmes Wiley. The Stone House Restaurant operates there today.

In 1916, Orson A. Wiley and his wife Emma Holmes built this bungalow style home of stones from local rivers and streams. Orson Wiley owned a livery stable and feed store nearby. While constructing the home, the Wiley’s and their children lived in the second story of their livery stable, where horses, wagons, and carriages were stored and rented.

Once the livery was sold, Mr. Wiley became a saloon keeper. He was a bartender at the Eagle Bar, described as Redmond’s finest sample room for fine wine, liquors, and cigars. Mr. Wiley was also one of three one-eyed bartenders.  Loss of an eye was often attributed to the logging industry or war.

It was rumored that Wiley was a bootlegger during Prohibition; making alcohol in a still in a small building behind his home and selling it in alleys or transporting it to saloons through underground tunnels. Though no evidence of this has been unearthed during recent construction throughout the City’s downtown, this is still a favorite local tale.

Today, “The Stone House” restaurant occupies the building and maintains a lively presence in the Redmond community. Over the years, the O.A. Wiley home has become known as the “Stone House” and is only one of two buildings in King County constructed of stones from the local rivers and streams.