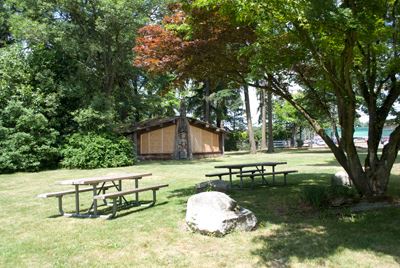 In June 2009, the City prepared a master plan for this park site. The City engaged a number of commissions and members of the public in the visioning process in the summer of 2009. The consultant team prepared park programming themes and concepts and sought input from the public on these ideas in the fall of 2009. The master plan was finalized in the spring of 2010, underwent State Environment Policy Act (SEPA) review in the summer of 2010, and was adopted by City Council in 2011. The City has a series of maintenance projects planned in 2013 to 2014 but does not have full funding to implement the master plan at this time.

Dudley Carter Park is a 1.37 acre City of Redmond park located along the Sammamish River Trail, at the intersection of Leary Way and 159th Place NE. Dudley Carter was an artist in residence at this park from 1988 to 1992. In Mr. Carter's 100th year, he supervised the resurrection of Haida House Replica No. 4 (circa 1980) at the site with the assistance of family and friends. However, he passed away before it was completed.

This park was transferred from King County to the City of Redmond in 2005. The Haida House Replica No. 4 is now a King County landmark.

The purpose of the master plan and proposed park redevelopment include preserving the Haida House Replica No. 4, respecting the history of the site, re-developing the site sustainably, and attracting people to this underused park.