The following are draft infrastructure plan materials dated August 2016. The materials are based on concepts developed in late 2015/early 2016 and public input provided in early 2016:

This work builds on the Stormwater and Park Facilities Conceptual Design (PDF) work completed in 2010 and the Overlake Village Street Design Guidelines (PDF) completed in 2011 and adopted into the Redmond Zoning Code in section 21.12 and Appendix 7. Those documents identified infrastructure needs north of NE 24th Street and also identified an urban streetscape character that will carry through in the current work for the area south of NE 24th Street.

The outcome of the current work will be an infrastructure plan and phasing plan that are consistent with the Overlake Village vision and that provide clear guidance to City staff, property owners and developers as the City processes redevelopment applications and makes capital investment decisions.

Additional land use and transportation modeling for portions of the Overlake Village South study area are underway in 2018. The outcomes of this work will inform proposed refinements to the planned transportation network. 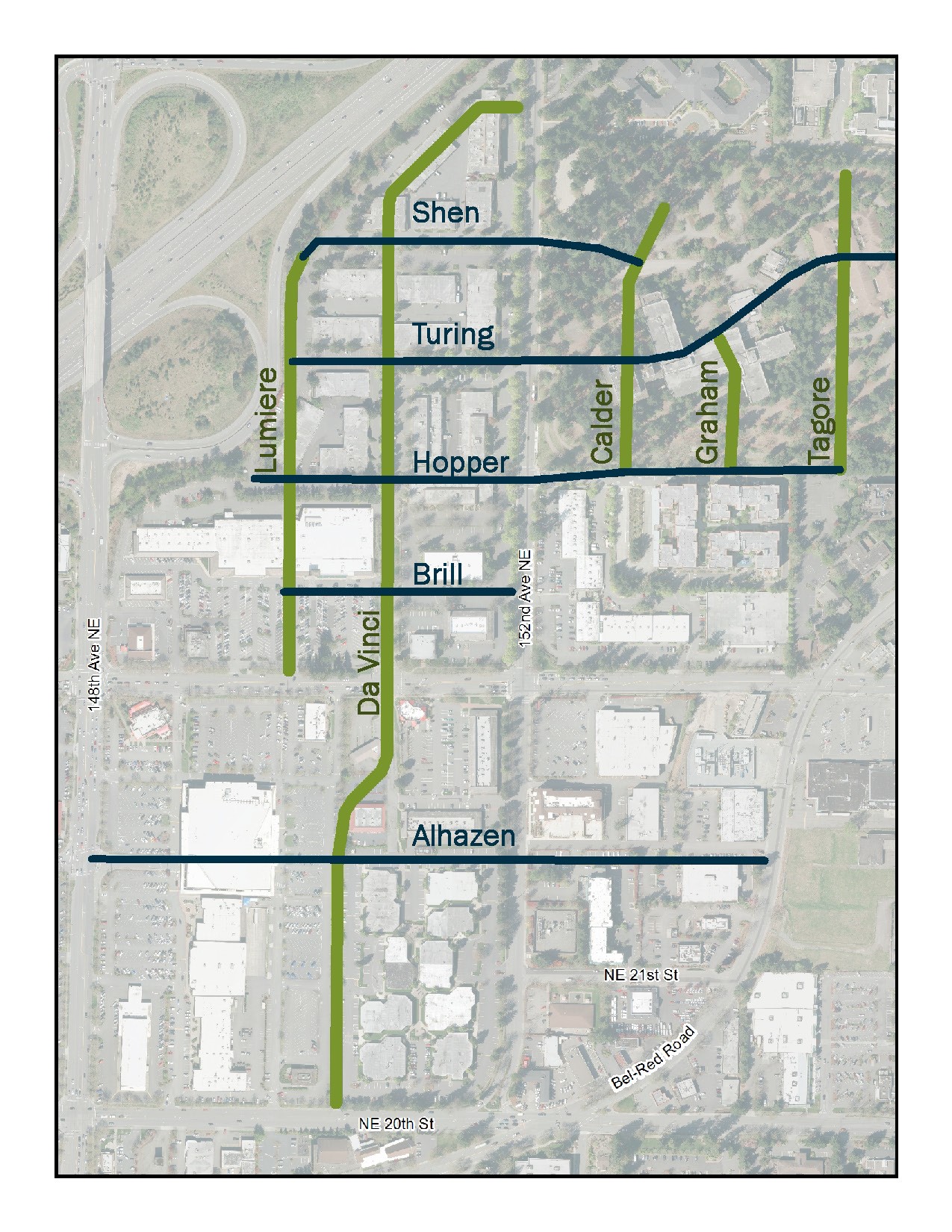 The Overlake Village transportation system is built on a suburban model of big blocks and few streets. As a result, motorists, pedestrians and bicyclists are limited to use of a few streets, which contributes to congestion on those streets and less direct trips. To support improved mobility and circulation, the Overlake Neighborhood Plan calls for a finer street grid as properties redevelop. The City anticipates that the street grid will take shape over a number of years as property owners redevelop their properties. The first parts of the new grid are under construction at Esterra Park. View Overlake Village Street Design Guidelines (PDF).

New streets in Overlake Village will be named for artists and technology innovators from throughout history and around the world. Overlake will continue to be a location of innovation, creativity and diversity, which provides inspiration for the new street names. The names will enhance the Village's character and sense of place.

Over time the City will integrate elements of the names and stories of these individuals into the fabric of the Village itself. Street signs will be installed as new streets are constructed, beginning with new streets in the Esterra Park development. North-south streets are named for: Auguste Marie Louis Nicolas and Louis Jean Lumière, Leonardo da Vinci, Alexander Calder, Martha Graham, and Rabindranath Tagore. East-west streets are named for: Abū ʿAlī al-Ḥasan ibn al-Ḥasan ibn al-Haytham, Yvonne Madelaine Brill, Grace Hopper (watch a video about Grace Hopper), Alan Turing, and Sh Kuo.