For many years this area has been the crossroads of two important transportation systems; the Sammamish River and the railroad. Most of the street and road systems in and around Redmond today are here because of these two systems. The trestle is a special location that represents the linkage between these two systems.

Steel panels have been built into the handrails of the trestle that tell the stories of this special place. At the overlooks and at both ends of the trestle panels depict images of the natural and railroad history of this important crossroads. Others share the inspired words of former Poet Laureate Rebecca Meredith.

The panels on the trestle are beautiful though they don’t tell the whole story behind images. Here is where you can dive a little deeper and find out more. 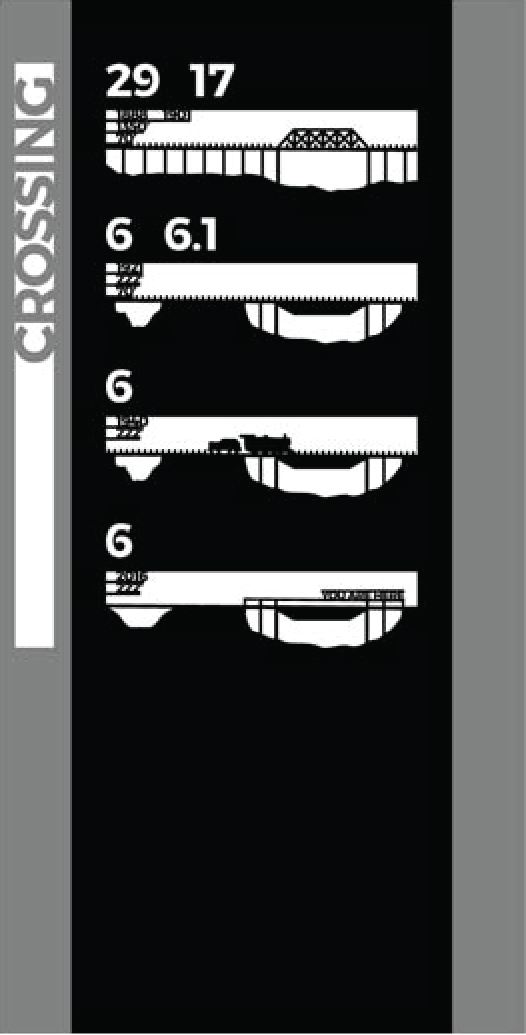 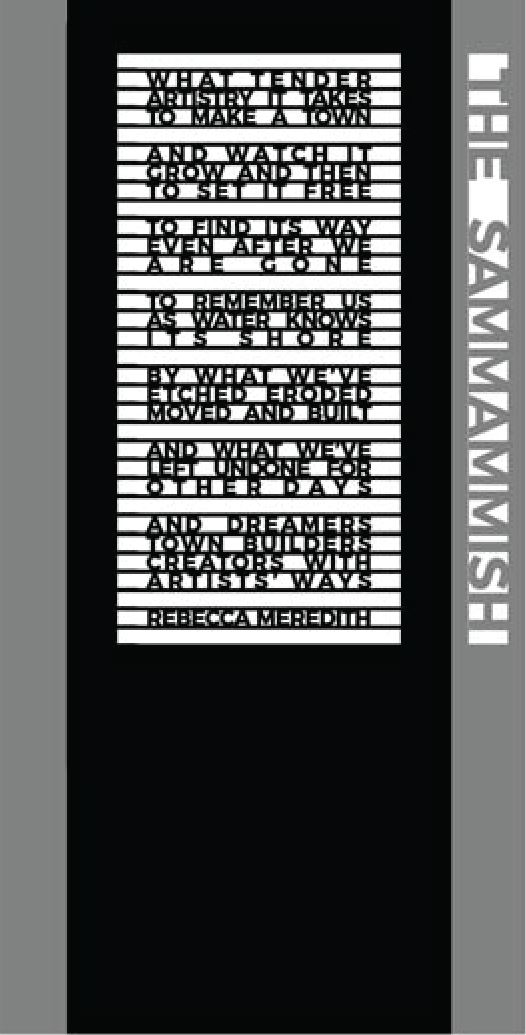 All things change and evolve with time and all things have stories to tell, even bridges. The trestle over the Sammamish River has passed through many owners and has been called by many names. Its stories include how one family stood up to the railroad in the early 1900’s. It’s structure has evolved from wood, to steel, to concrete. For decades it carried trains powered by steam and diesel and now carries people driven by their desire to be out in the community. 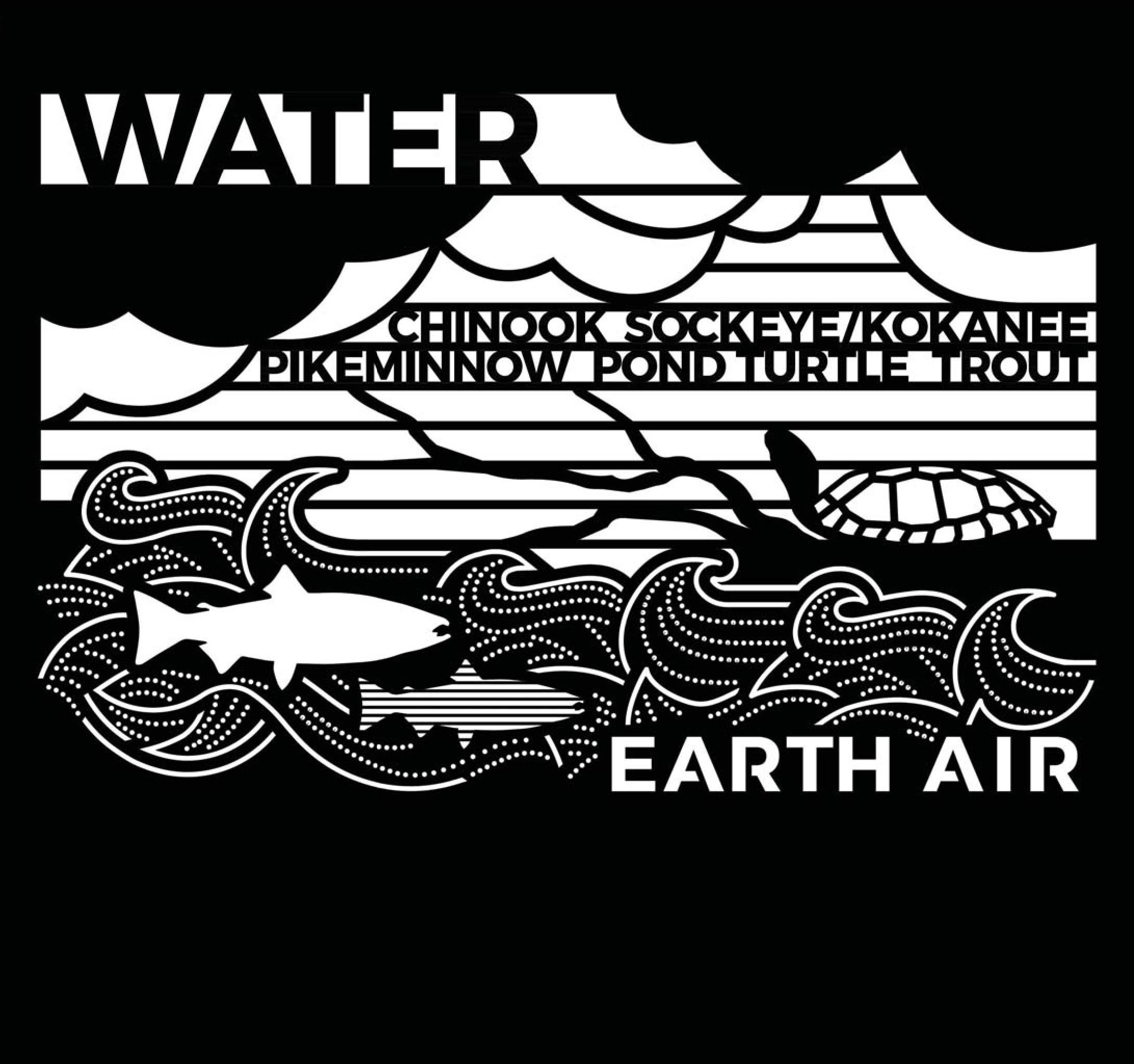 Where are the fish? Chances are a few fish are swimming right below you, and some you’ll see from the bridge include migrating salmon, especially the big Chinook which splash their way from the ocean upriver to spawn near their original birthplace. Or maybe a turtle will splash into the water off a log. See more about these and a few other water creatures in our neighborhood here.

The Sammamish River, also called the Sammamish Slough, originally meandered over the course of 23 miles in the Sammamish valley. It is said that people would walk the river as a preference to navigating by boat due to the river’s length, slow and shallow flow, and risk of becoming lost in its many braided channels. 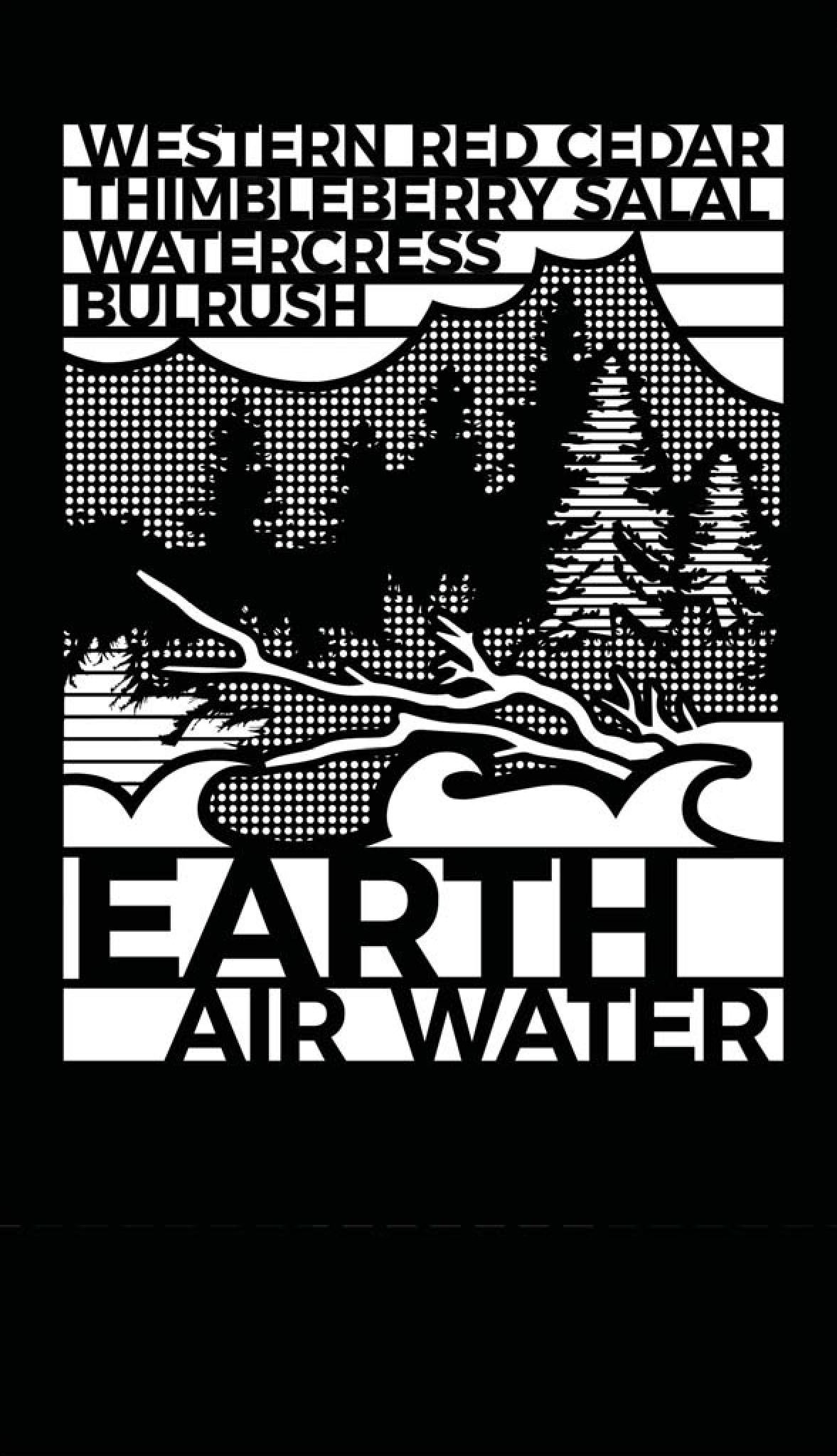 Rooted in place, yet spreading far and wide, our native (and not-quite-native) plants used the river as a road as well. From giant logs of wood floating from lumber mills, to the rhizomatic take-over of the watercress, the plants of the Sammamish River are never simply “in one place.” 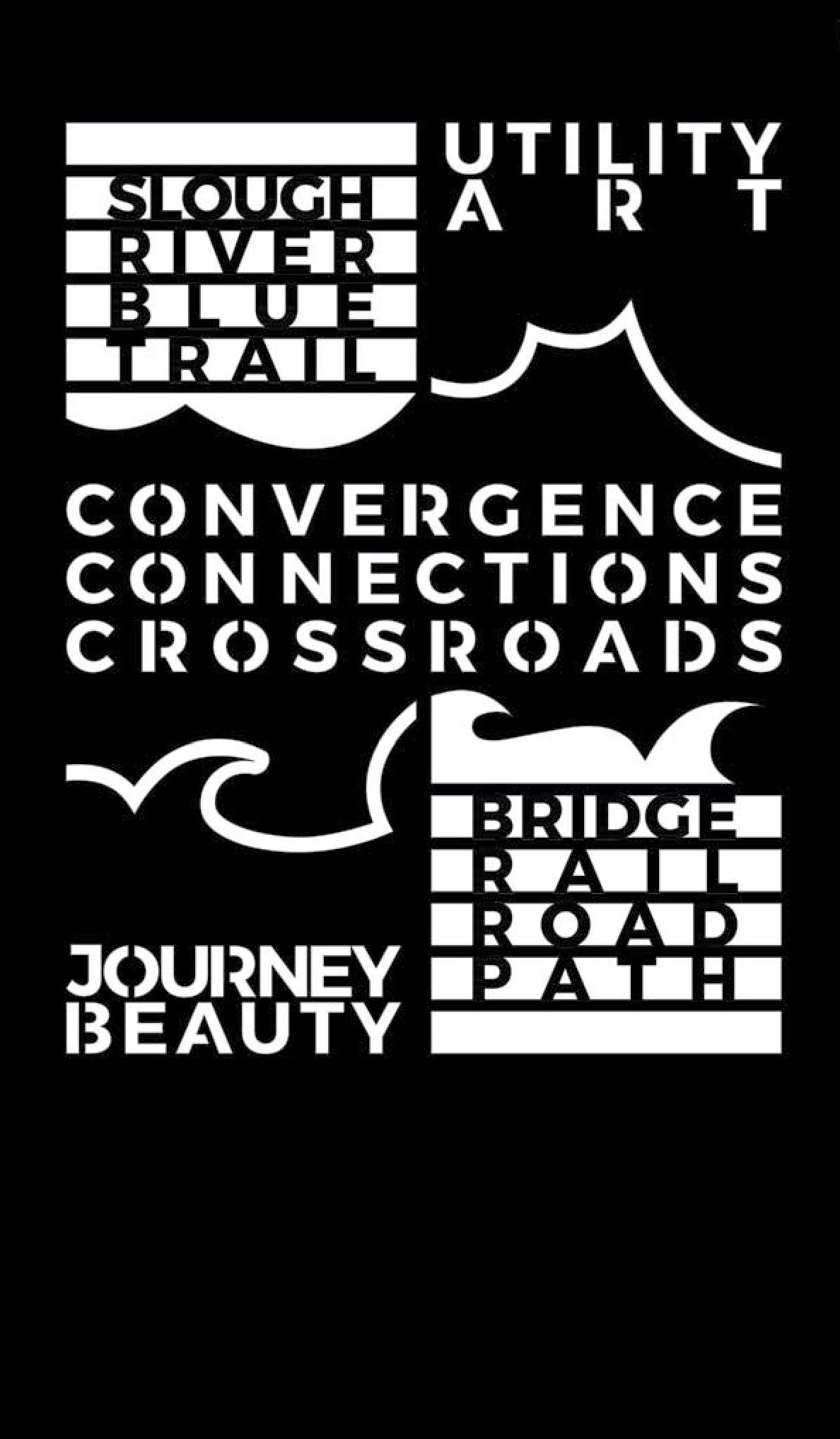 This panel depicts an interpretation of the crossroads and convergence of several systems and elements. The crossroad is often significant as a place for decision making. Will you travel east into the Downtown or west toward the rest of the Sammamish Valley? Or, will you opt to travel north or south along the Sammamish River?

From boats using the river as a scenic “blue trail,” to trains using the bridge as a rail road, and animals using the air - the Sammamish River has long served as a place where connections converge. These days, one of the most beautiful ways to travel through Redmond is by bike. Riding a bike along the bridge and the river lets you seamlessly go from the forest to river to city to enjoy the things that have made the Sammamish River a special place for so many years.

Railroad service first reached Redmond, across the bridge you are standing on, in early 1888. The Seattle, Lake Shore, and Eastern Railway (SLS&E) was incorporated in 1885 to counter the Northern Pacific Railroad’s refusal to make Seattle the terminus for its transcontinental line. As such, the line through Redmond was the part of the SLS&E’s own transcontinental attempt, which never went further than North Bend, where it had reached in 1889.

Regardless, railroad service to Redmond was invaluable due to the vast improvement it provided over the time-consuming methods that existed prior-circuitous travel on the winding, shallow Sammamish River or overland on extremely primitive wagon roads. For at least 30 years, the railroad was the preferred method for freight and people to travel to and from Redmond. 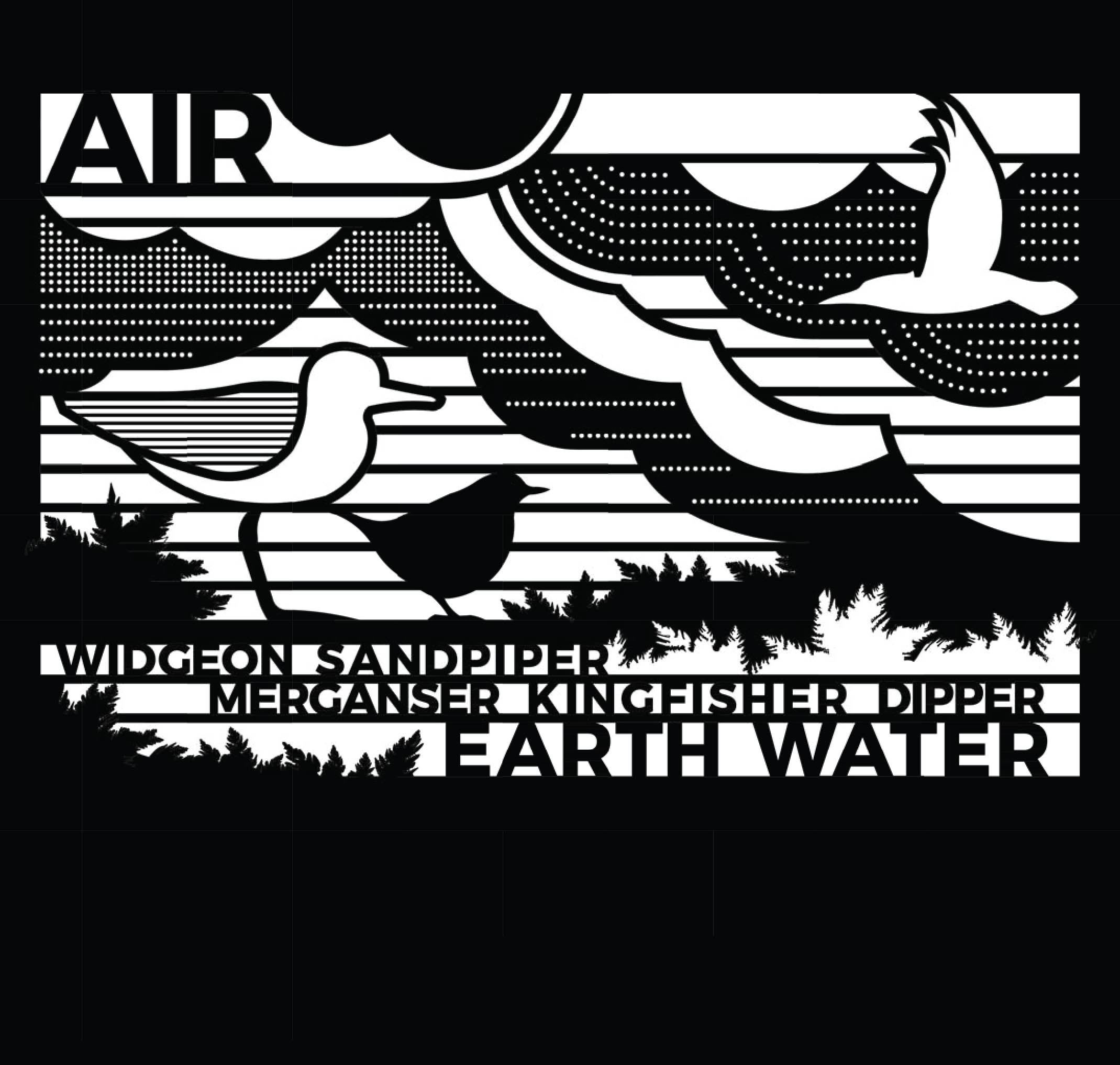 Seeing a flash of silver from the bridge? Chances are, you’ve seen a Widgeon, Kingfisher, Dipper or Merganser - diving into the water after their dinner! Along with the Sandpiper, these five species played a key role in the native Salish dinner table when they flew through the Sammamish River corridor in the spring and fall to get to their mating grounds in Canada. 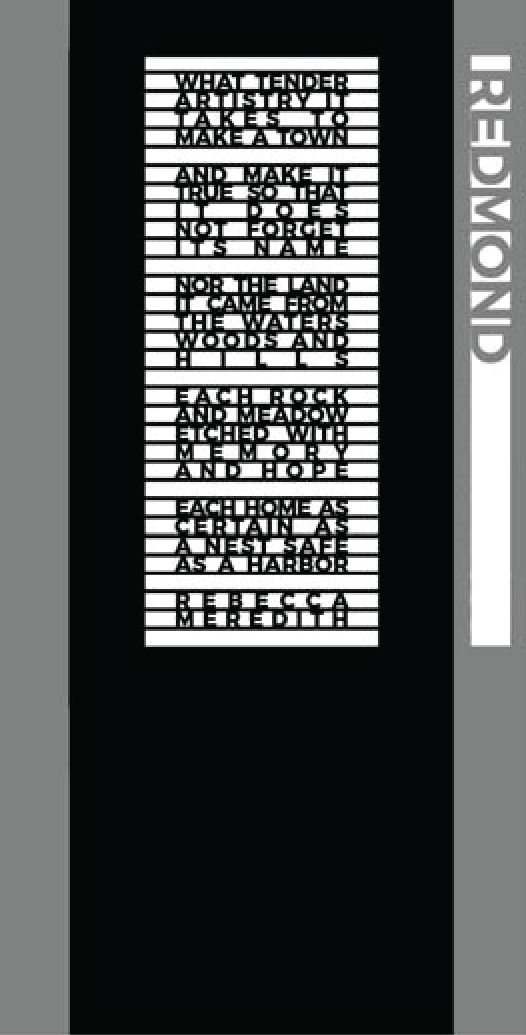 The Sammamish Valley was carved by glaciers and shaped by flooding over thousands of years. The Sammamish River (or Slough) has wound its way through the flat valley floor. The form of the valley shaped how people have developed this area. The arrival of the railroad, the building of Redmond and the straightening of the river has left their mark on the valley as well.