Intersection Visibility (also known as Sight Triangles) is an area defined by a driver's line of sight and identifies potential safety hazards.

Drivers need unobstructed horizontal and vertical views within what is called the Sight Distance Triangle, to be able to see oncoming traffic, pedestrians, and cyclists from any direction. Good sight distance is critical to reducing the potential for collisions. 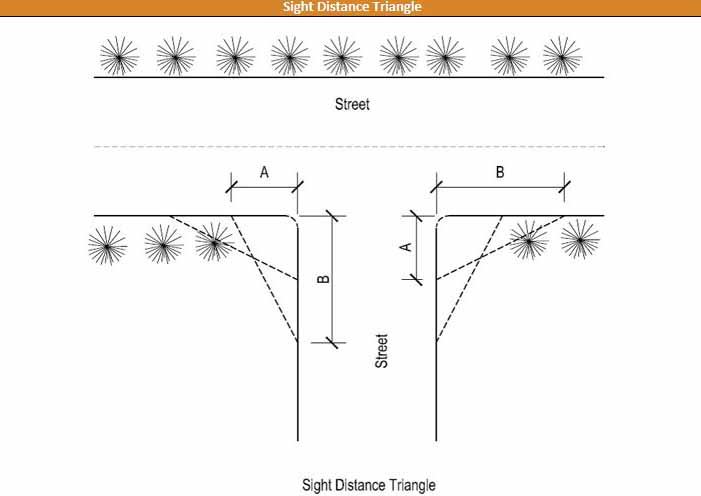 Utility poles, traffic control devices, and other inanimate objects 18 inches or less in width are permitted when spaced at an adequate distance as to not significantly obstruct the intersection visibility area.

Signs, fences, hedges, shrubs, natural vegetation, trees, and other inanimate objects greater than 18 inches in width are not permitted within the sight distance triangle between 2 and 8 feet above the surface of the intersecting streets.

Homeowners are responsible for keeping the intersection visibility area clear of obstructions on their property and out to the curb on the adjacent street. In 2016, the Washington State Supreme Court confirmed that cities must address these obstructions to keep the roadways in a reasonably safe condition. View the unanimous decision made by the Supreme Court.

If you live on a corner and you are not maintaining the intersection visibility area as required, the City may notify you to take care of the problem by a specific date. If the problem is not resolved within that time frame, the City may impose fines that could accrue daily until the work is complete.