Redmond's Traffic & Pedestrian Safety Program is part of the City's commitment to safety and livability of our neighborhoods. Through active participation by you and your neighbors, we can identify the problem, plan the approach, implement the solutions, and evaluate the effectiveness.

Fill out the Report an Issue / Request a Service Form for review by City staff and include as much detail as possible regarding your Traffic & Pedestrian Safety concern. The request will be reviewed by City staff, which may includes collection of traffic data. You will be contacted and informed of the findings once the review is complete.

If Approved for the Program

The program has two levels of treatments:

Posting appropriate traffic control signs is a Phase I solution. Signs may include speed limit, parking, dead-end, school signs, etc. The sign pictured at the right directs drivers around a center median. 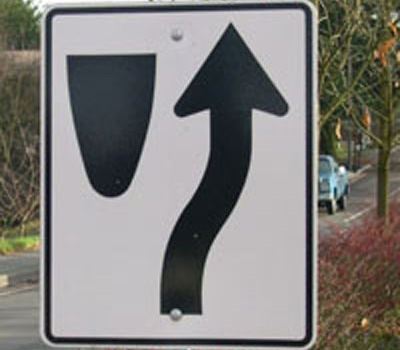 Legends and other markings on neighborhood roadways can be a Phase I solution.  Pavement markings can include center lines, foglines, school crossings, bike lanes and speed limits.  Providing marked parking lanes on both sides of a street narrows a road and can reduce vehicular speeds. 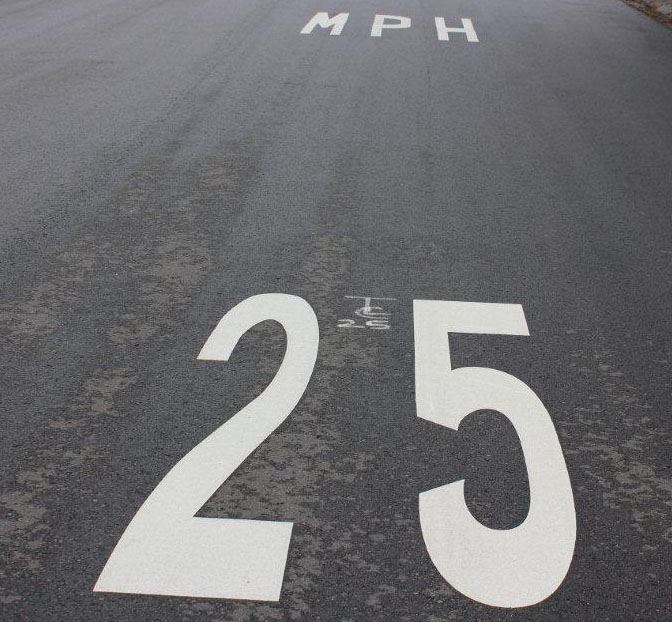 Sight distance is improved when brush is trimmed and vegetation is cleared by homeowners or City crews. 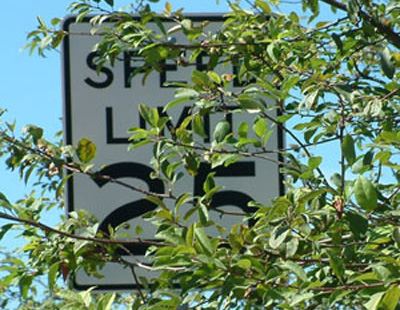 Increased enforcement by the Redmond Police Department can be a recommended Phase I solution.  When reporting frequent and specific neighborhood speeders, providing police with license plate numbers, location, and times of day can make targeted enforcement most productive. 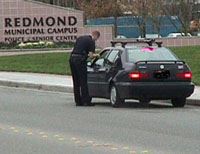 A portable trailer with a radar unit detects vehicular speed, showing drivers their "actual" speed versus the posted speed limit. This information helps to promote compliance with the posted speed. 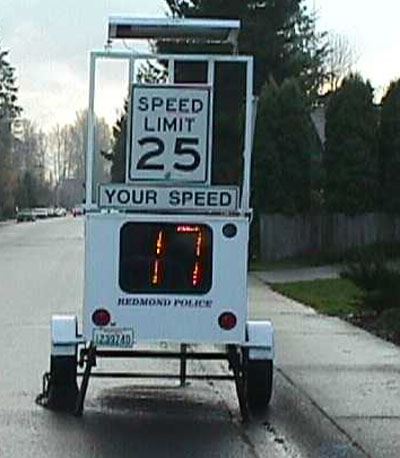 Curb bulbs are a form of roadway narrowing at intersections that reduce the street width from curb to curb. They shorten crossing distances for pedestrians and draw attention to pedestrians via raised peninsulas. They also tighten the curb radii at the corners, reducing the speeds of turning vehicles. They can be used to create protected on-street parking bays.

Curb bulbs come in a wide variety of sizes and typically result in speed decreases of 7%. They are easily combined with a raised intersection or raised mid-block crosswalk. Curb bulbs placed opposite one another mid-block create a "choker," which can result in more significant speed reduction. 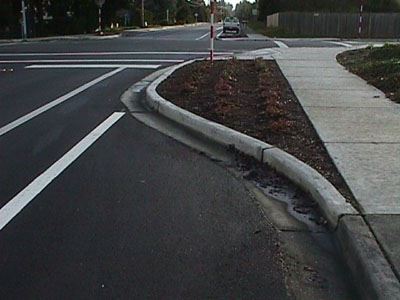 Narrowing a street with pavement markings, on-street parking, curb bulbs, or center medians can help improve safety by reducing vehicular speed, making streets easier to enter from driveways and side streets, and reducing the time and distance that pedestrians are exposed to traffic when crossing. Typical speed reductions are 3 MPH, or 7%. Narrowing can lessen the impact of motor vehicles on a neighborhood.

Raised, elongated islands placed on the centerline of streets are commonly called medians. Medians come in many sizes and can be designed to follow the curvature of a street. Medians are often landscaped to provide a visual amenity. Fitted with a gap to allow pedestrians to walk through at a crosswalk, they are often called "pedestrian refuges".

Medians can be used to narrow lanes, or to provide physical separation from traffic. While they provide an average 7% decrease in travel speeds, their speed-reducing effect is somewhat limited where there is an absence of any vertical or horizontal deflection.

Distinctly different than the "speed bumps" found in many private parking lots, speed humps, speed tables, speed cushions, and raised crosswalks are raised areas of pavement placed across a road, engineered to safely moderate the speed of traffic. Typically ranging between 3 and 4 inches in height and 12 to 22 feet long (in the direction of travel), they are often placed in series or intermixed with other traffic calming measures to provide continuous speed control along a corridor.

These devices typically reduce average speed by 4 to 7 MPH, and reduce the frequency and severity of collisions by 11 to 45%. One variation - the speed cushion is designed with gaps that allow emergency vehicles to straddle the device, thereby reducing or eliminating the 1 to 9 seconds of delay generally associated with speed humps. Raised crosswalks, constructed like a speed table, are marked with high visibility crosswalk markings, and can be found at mid-block locations where speed control is an issue. They not only slow traffic, but also make pedestrians, especially small children, more noticeable to drivers. 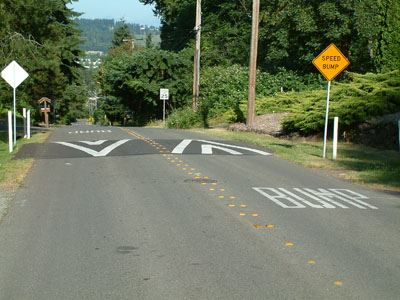 Average speed reductions of 4 MPH are typical as are collision reductions of 11%. This device functions best at intersections that have four legs. 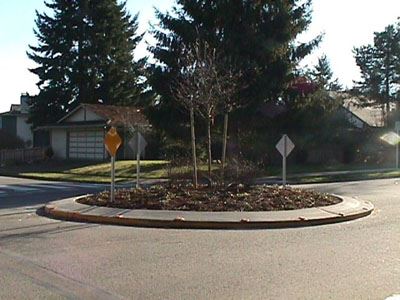 A modern roundabout is a circular intersection where traffic flows around a center island. Roundabouts are not traffic circles or the older-style rotary traffic islands found in some East Coast and European cities. Roundabouts have proven themselves to be safe and efficient.

Since vehicles entering the roundabout are required to yield to traffic in the circle, more vehicles can move through the intersection with less delay. The unique one-way design of roundabouts also accommodates the turning radius of large vehicles, like semi-trucks and buses.

A study done by the Insurance Institute for Highway Safety found that where roundabouts have been installed, motor vehicle crashes have declined by about 40 percent, and injury crashes have been reduced by approximately 80 percent!

This significant reduction in accidents is largely due to the lower number of conflict points. Conflict points are those areas where collisions could occur as traffic paths cross. At a traditional four-way intersection there are 32 potential conflict points. In a roundabout that number is reduced to eight, and those serious right angle crashes are virtually eliminated. 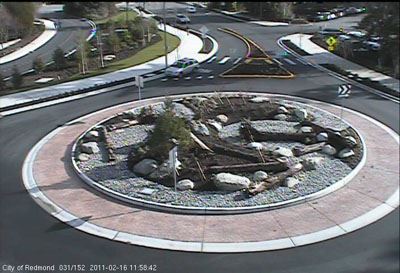 The city is offering these yard signs to help raise awareness of traffic safety in neighborhoods.

Currently, there are four different signs with traffic safety messages.

A maximum of 2 signs will be given per household and the total number may be limited in any one neighborhood.

If you would like to request a sign, please submit a service request using the city's "Report an Issue" tool using the issue type: Traffic Concerns: Neighborhood Traffic Calming. 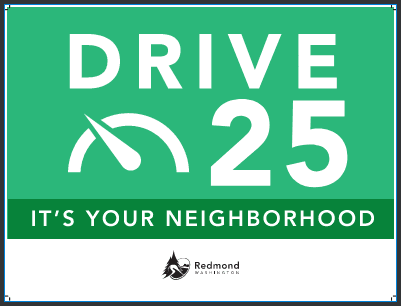 To see some examples of installed safety elements:

Visit the City of Redmond Walking page in the Transportation section of this website.