Redmond offers many opportunities to walk, bike or skate. There are many trails, sidewalks and walking paths to walk whether for fun, exercise or simply to get from place to place within the city or on an urban trail. Visit Redmond’s East walking map (PDF) and West walking map (PDF) offer many choices to encourage you to put one foot in front of another.

Read our Share the Trail brochure (PDF) filled with best behavior and safe practices when sharing the trail with others.

Go Redmond provides incentives for people using alternative modes of transportation to get to work.

The following are safety elements the City has deployed for pedestrian safety:

RRFBs are pedestrian actuated devices with yellow rectangular flashing lights that help bring attention to a pedestrian at an uncontrolled marked location.

When an RRFB is installed, motorists yield at much higher rates which results in fewer pedestrian collisions.

RRFBs are typically deployed with additional low-cost safety treatments such as signs and pavement markings.

Per the Manual on Uniformed Traffic Control Devices, the federal document that regulates traffic control installations, RRFBs shall only be installed at uncontrolled (no stop signs or signal) marked locations. 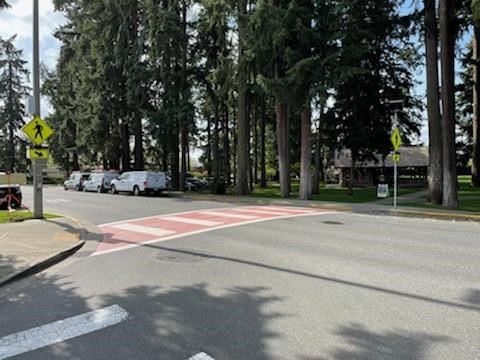 This project was started to bring higher visibility to some marked crosswalks with higher levels of conflict in Redmond.

Public surveys were conducted at several crosswalks with known conflict areas around the city. Results from the survey helped determine the locations chosen for the initial hi-visibility treatments.

The crosswalks use preformed thermoplastic material in a red brick color. The material is installed with special equipment using infrared heating. These treatments have higher visibility due to the contrasting colors and retro-reflective elements. They also last many years longer than the typical crosswalk markings.

A follow-up survey will be conducted in July to gauge pedestrians perceived visibility while using the new crosswalks.

The locations chosen for this pilot project are shown below: 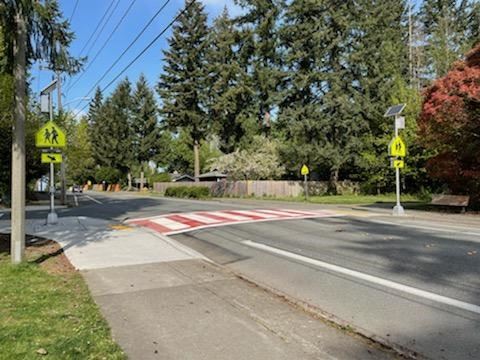 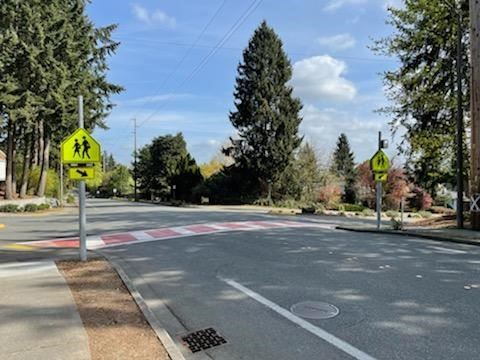 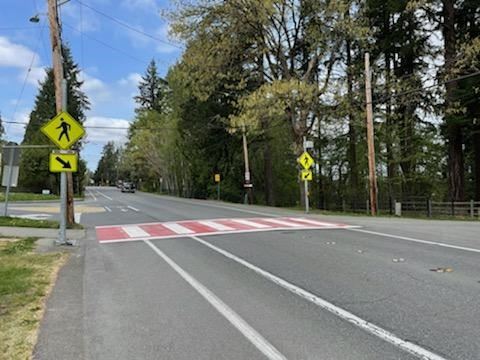 The law in Washington State places a legal obligation on drivers to stop for pedestrians in crosswalks, drivers must come to a complete stop.

A crosswalk is any portion of the road outlined with white paint or created by reflective pavement markings or a different texture of concrete-like brick pavers. These markings identify the portion of the road that is designated for pedestrian travel and define a "marked" crosswalk. It is the preferred crossing location for pedestrians, particularly if the crosswalk is enhanced by a traffic signal. However, using a crosswalk does not relieve pedestrians from using due care for their own safety.

A mid-block crosswalk is a crossing marked in between intersections, usually at an uncontrolled location (without a traffic signal or a stop sign). They are designed to discourage pedestrians from making random crossings by offering a convenient location to cross in an area without frequent intersection crossings.

Legal pedestrian crossings exist at every intersection, whether the crosswalk is marked or not.

Criteria for crosswalk installation is determined differently for a stop-controlled intersection and an uncontrolled location.

Uncontrolled crossings must be installed with enhancements such as crosswalk signs, advance warning signs, rectangular rapid flashing beacons, median refuge islands, in-street pedestrian signs on delineators,  etc.  Because of the necessary enhancements, these crosswalks can be costly and may take years to acquire funding.

These crosswalks will be installed if funding is available and they meet any of the below conditions are met:

If you would like the City to consider a marked crosswalk at a specific location, you can submit your request via email to Crosswalk Request.

Countdown signals tell pedestrians the number of seconds that are left to cross the street before the traffic signal changes. Pedestrian countdown signals are installed at all of Redmond's signalized intersections. These new signals improve safety by helping pedestrians make an informed decision about crossing the street. Traffic engineers calculate crossing distances based on a pedestrian walking speed at 3.5 feet per second, which is slower than most people walk.

If you are concerned about pedestrian signal timing at a particular location, or have another traffic safety issue, Report an Issue or email Signal Timing.

Located around Redmond's Downtown Pedestrian District communicate to drivers they are in an area where they can expect higher volumes of people walking. 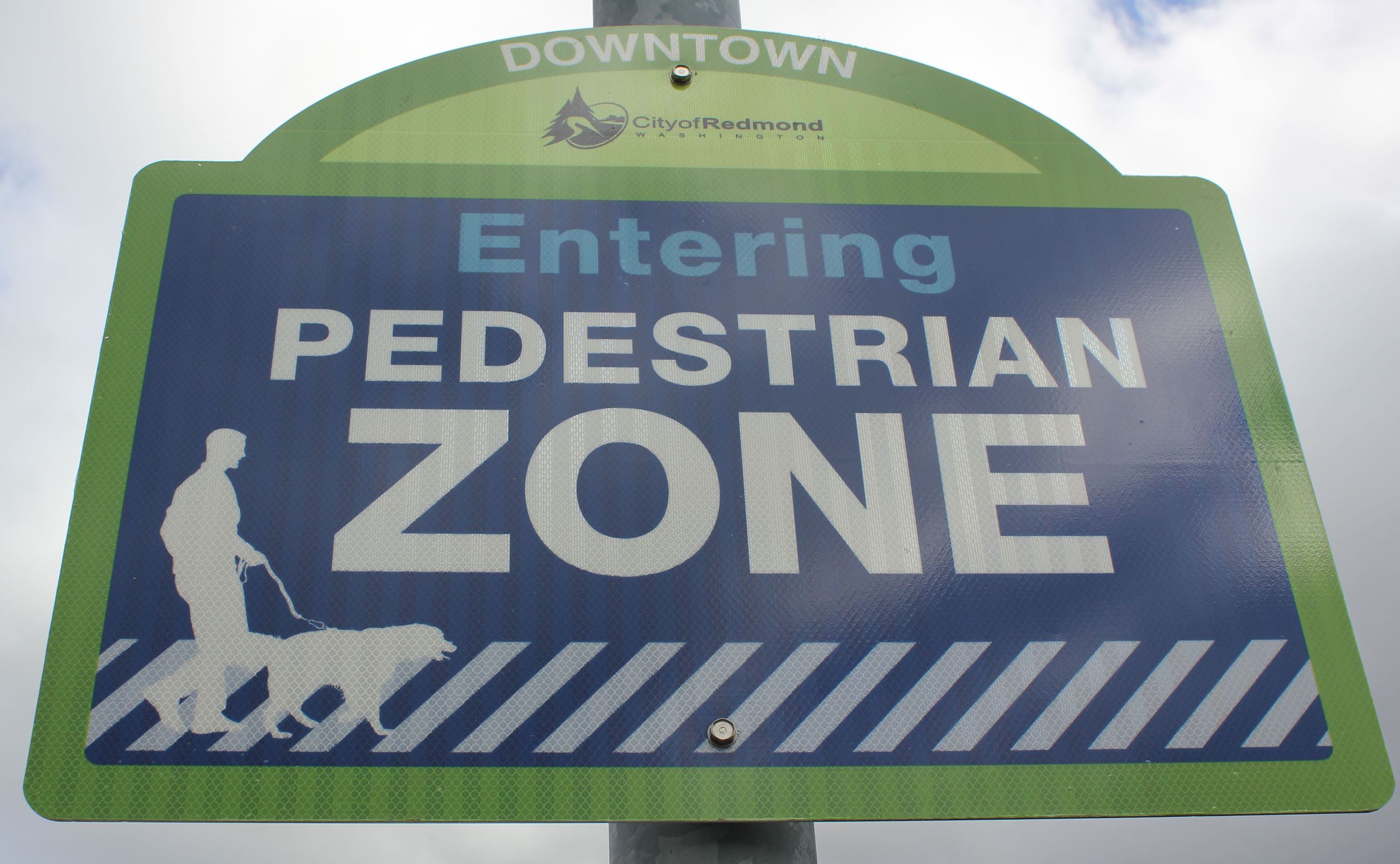 Look for the pedestrian zone signs at these locations: 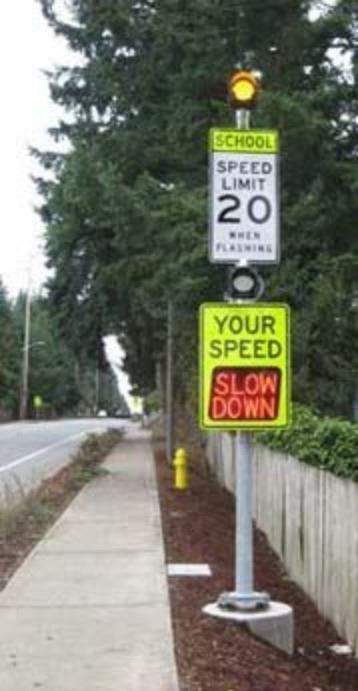 Encouraging traffic to move safely when approaching schools and school crosswalks is an important part of what we do in the Public Works Department.

Each year, in late August, the school district finalizes their calendar and schedule, including holidays, vacation days and parent/teacher conferences,  for each school within the city. The Public Works department updates the programming of each of our interactive 20- MPH school zone speed limit locations with the information from the school schedules.

City maintenance staff maintain and repair these units as well as, add orange flags to school crosswalk signs each Fall to remind the motoring public that school is about to start.

While technology, signs, markings and flags all make a critical contribution to traffic safety, we must never forget that it is the careful attention shown by drivers and pedestrians that is paramount to ensuring safety in school zones!

The City of Redmond encourages children to walk to school. Learn more about the program on the GoRedmond SchoolPool program page.

The Albert Einstein Elementary school zone has been extended to the east on NE 116th St. This was done to capture the many students that walk further east than the previous school zone boundary.

An ordinance change was approved in August 2020 to alter the school zone.

Look out for the newly installed signs which have been flagged. Please be aware of this change and adjust speeds accordingly.

To Request a Crosswalk

Use the City's "Report an Issue" tool above.