Attention City services will be closed on Monday, July 4, to observe Independence Day. Read On...

Smith Woods Park (undeveloped) includes a small stream (Monticello Creek headwaters) flowing into a pond which appears to have been installed by the former owner. In 2016 a void, with water flowing subsurface, was discovered in the berm which forms the existing pond. The berm was subsequently notched (under an Emergency Hydraulic Project Approval permit), lowering the water surface approximately two feet to reduce pond volume and protect downstream properties. Stream bed cobble was later placed in the temporary channel. Permit requirements include building a fish-passable channel by 2021, rebuilding the pond, and restoring the stream channel.

This project enhanced approximately 100 linear feet of the stream channel, including new streambed material and large woody debris. The project also reconstructed the pond's berm. Invasive plant species were removed and will be replaced with native plantings. Trails across the stream or into the woodlands were not part of this project but will be considered as part of a future Park design. 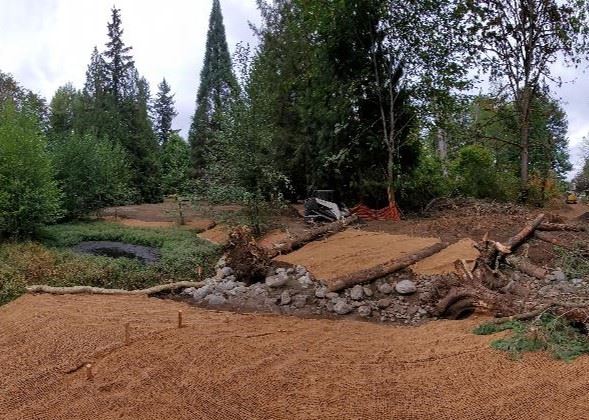